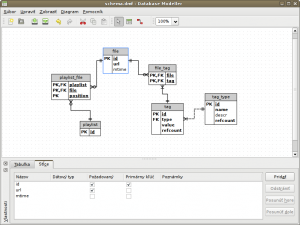 Several times I needed a tool to play with database models on Linux and I haven't found anything decent, so I've decided to write one myself. I've been using Visio's entity-relational diagram features a lot and I like it, so this is where I got ideas for the diagram look and editing UI design from. It's far from complete, but it already does most of the things I needed it to do.

You can get the development version of the source code using Git:

You need to have Qt4 installed, then you can run qmake followed by make to build it.

As I mentioned, this is a personal tool and not a very high-priority project, but there are a few things I'd like to implement in near feature: