I bought a cheap Arduino nano clone from eBay and after I plugging it in via USB, I was getting only errors when trying to upload some code. I realized it came without the bootloader installed. And I didn't have a normal AVR ISP programmer to program the flash memory on the microcontroller.

The ATmega328P chip can be programmed using the SPI protocol. The process requires 4 digital wires and Raspberry Pi with its GPIO pins can be easily used to do that. On Linux, you can interact with GPIO pins using a sysfs interface and avrdude (the application that can program the chip) can talk the SPI protocol over this interface. So it's just a matter of connecting the pieces together. Normally you would use the AVR ISP pin header on Arduino to do this, but I did not have the right connector for that, so I used regular pins and connect them on a breadboard.

You need to use specific pins on the Arduino, but you can use any of the available pins on the Raspberry Pi. I used these:

Arduino should normally be powered by 5V, but Raspberry Pi needs 3.3V on GPIO pins, so we will run the Arduino at lower voltage. It should be fine for the programming. 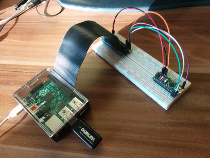 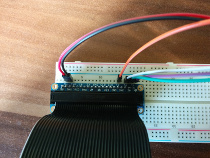 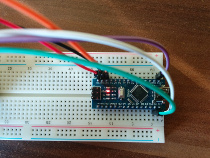 Now the software part. The avrdude package that comes with Raspbian is not compiled with linuxgpio support, so we need to build our own.

You need to edit avrdude.conf to let it know the pins used.

Somewhere in the file find the commented out linuxgpio section and add this in there.

If everything is connected and configured properly, you should be able to run this now and get into the avrdude console.

Now we need to modify the Arduino IDE configuration to recognize the new programmer. I don't know if this can be done locally, so we will edit the system-wide configuration file.

Put this somewhere near the end of the file.

We also need to tell the Arduino IDE to use our version of avrdude. Again, because I don't know of any better solution, we will overwrite the default symlinks that come with the package.

That was the last configuration step and now we can actually program the chip. Becuse you can't use the Linux GPIO sysft interface as a regular user, you need to start the Arduino IDE as root for this. Select your board type in "Tools -> Board", select the "RPi GPIO" option in "Tools -> Programmer" and then install the bootloader using "Tools -> Burn Bootloader". Once the bootloader is installed you can close the IDE, remove the pin connections, plug in USB cable and start the IDE as a regular user.

Hope that helps somebody.