Inside the Acoustid server

Time flies really fast. It's been over a year ago since I first released the server code for Acoustid. Back then, Acoustid was just an experiment, but the project is becoming more and more visible and these days it's serving between 500k and 600k lookups every day.

What makes me more happy than that the project is being useful is that the decisions I've made regarding the server architecture turned out to work very well and the server generally very fast and scalable. The average lookup processing time is around 60ms and I expect the number to go down, not up in the future.

Before scoring the results, the server must somehow get the results in the first place, and this is where normally things get slow. The database currently has more than 10M fingerprints. If we assume all fingerprints have at least two minutes (which means 948 numbers per fingerprint), that's 9480M numbers to search in. Just saving these numbers on disk, together with the pointers to the fingerprints they come from, would require 76GB of space. And since the search must be fast, the data must fit in RAM. This is obviously not the way to go if we want to be able to host the service on a single server and yet get response times below 100ms. The search space must be reduced.

The next step is to take these candidates and compare them against the original fingerprint. This is done in PostgreSQL, where the full fingerprints are stored. Each of the candidates is compared against the original fingerprint using a function that tries to align the two fingerprints and then calculates the bit-error-rate between the overlapping parts. The result of this function is a score between 0 and 1. Fingerprints with the score above a certain threshold are considered valid matches, MusicBrainz metadata is looked up for them, they are returned to the user and that's the end of it. 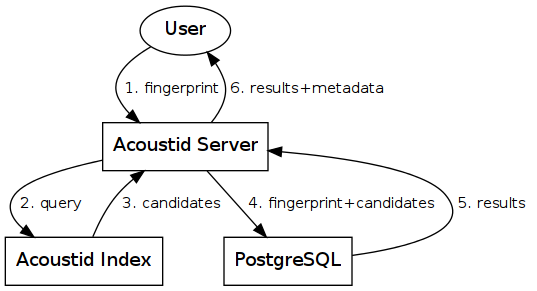 This covers the searching side of the server. I'll try to write another post soon about the data management side (importing, merging, etc).